Henry W. Sherry: the lover and killer of Mrs Waldock

This is for my friend Belinda, whose interesting ancestor I have been very happy to research.

Henry Walter Sherry was born in the first half of the year 1839 in the parish of Stourmouth, near Dover, in the English county of Kent. His father John Sherry (b. 1812), the son of John and Harriet Sherry, was a prosperous local farmer who owned a large chunk of land totalling 12 to 13 acres. John’s wife Eliza has no job listed in the 1841 and 1851 census returns, signifying she was unemployed or more probably a home-maker by modern standards.

John and Eliza had two children, a daughter who was also called Eliza (b.1837) and Henry Sherry himself.  John passed away in early 1880, seventeen years after his son was deported to Australia. It is highly unlikely they ever met again after Henry’s conviction.

In his youth, and until he committed his crime, Henry Sherry worked as a fruit salesman. On the ship manifesto dating back to the year he was deported to Australia, he was described as being single and childless; he was 5 feet and 10 ½ inches tall, had brown hair, black eyes and an oval-shaped face, had a “fresh” complexion and middling stout build; among his distinguishing marks he had “cupping marks” on his chest, an alternative remedy amply used during the 19th century to allegedly mobilize the flow of blood and promote healing.

For unknown reasons, in 1861 Henry set fire to his father’s stockyard, which was described during his trial as a “dwelling house”. On 24th July 1861 the trial at Maidstone (Kent) ended with a verdict of life in prison, with Sherry being sentenced to be deported to Australia. Australia had been a penal colony for several decades, but often the men and women who were sent over managed to take away their families (if they had any), and consequently the population on the island grew as new convicts arrived each year. There is no record that Henry Sherry was accompanied out to Australia by anyone. 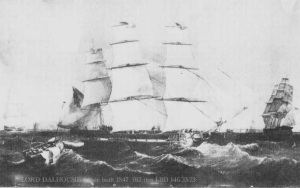 Lord Dalhouise, the ship which took Henry Sherry from England to Australia in 1863.

Henry Sherry boarded the Lord Dalhouise on 25th September 1863, some two years after his trial. The Lord Dalhouise was a 912-ton convict ship which had been built in Sunderland (England) in 1847. On that trip she carried the 29th of 37 shipments of male convicts which were to be resettled in Western Australia. The voyage took a total of 90 days and reached Fremantle on 28th December 1863 with a total of 89 passengers and 270 convicts. Among the latter was a man called Langley Southerden, who had already been deported to Australia once before on a ship called the Palmerston; in 1861 he escaped from Albany, Western Australia, but was later re-captured and put on the Lord Dalhouise to be taken back to Australia.

A group of convicts.

According to a newspaper clipping shortly after his death, Henry Sherry’s behaviour in Australia was “exemplary”. He later received his “ticket” (i.e. was released) and he began to work as a foreman for Captain Fawcett of Pinjarrah, Australia.

In 1870 Henry married Hannah Elizabeth Haynes, whom he called Annie. Annie was a domestic servant barely 19 years old at the time – Henry was about 31- who had actually been working under the employment of Captain Fawcett himself. Annie’s father was, like Henry, an ex convict. The couple settled in the Williams District, where Henry became a farmer, like his father before him.

At some stage in the 1880’s, Henry Sherry became romantically involved with Catherine Waldock (née Fletcher), the young wife of a local farmer, John Waldock. Catherine, herself the daughter of an English convict, was then a young and probably attractive woman of 35 years, with three young children of her own. It seems the romance between she and Henry went too far when he offered to leave Australia with Catherine, leaving everyone else behind. Catherine made it clear to Henry that she would not elope with him, making him red with anger.

On 16th September 1885 Henry Sherry went to a neighbour called Hoghton and asked him if he could borrow a gun and some strychnine, telling Hoghton that he wanted to shoot a hawk. He had other plans in mind. That same evening Catherine left her house accompanied by her two sons William and Thomas, who were aged 12 and 10 respectively. Their purpose was to shoot opossums, but as they shot their last round they realized they had no more bullets to spare, so they decided to return home. On the way, Catherine and her children met Henry Sherry, who later claimed that he had actually arranged to have a rendezvous with her. If this were true, she may have taken her children as a sort of protection against her would-be eloper.

Catherine and Henry talked together in plain sight of the two young boys, who later claimed that Henry drew out his gun, pointing it at her. Catherine turned her back to him, at which point he was heard to say “Here goes” and shot her. He calmly departed the scene, while little William and Thomas rushed home to get help. Catherine lay bleeding, her lungs and heart being fatally wounded by Henry’s bullet.

Henry’s plan allegedly had been to take the poisonous strychnine after committing the murder, but it seems that the quantity he took was not enough to kill a man of his size and proportions. He then tried to shoot himself, but the gun would not discharge the contents of the other barrel into his head. A third, fruitless effort to drown himself also failed miserably. Henry told all this to a local called Guthrie, who later brought it against Sherry during his trial.

Henry Sherry was apprehended without difficulty and taken to court. He claimed that he did not hate Catherine Waldock, but rather “doted on the ground which she walked upon”. To a constable he told that both he and Catherine had planned to meet on that fateful night and that he would kill Catherine before killing himself, but had failed to fulfil his part of the bargain. At no point did he express any hope of pardon, nor did he claim insanity nor any other motive which would potentially spare him “the rope”. 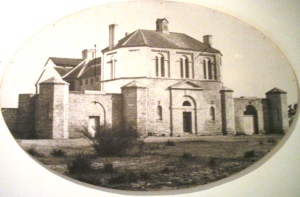 Perth Gaol, where Henry Sherry was hanged in 1885. The building closed down three years later.

Henry Sherry was found guilty of the murder of Catherine Fletcher Waldock and sentenced to death by hanging. His verdict was carried out on 27th October 1885. He was almost 47 years old.

The aftermath of this story offers several interesting twists. A few months after Henry was hanged, his widow Annie gave birth to a girl, Henry’s posthumous daughter, whom she called Emily.

Annie Sherry was left to bring up six children by herself; being 34 years old, it is little wonder she chose to remarry. Ironically, her choice of husband was none other than John Waldock, the widower of unfortunate Catherine Waldock herself! The couple had three children together: John Edward (1888), Herbert Harding (1891) and Charles Aubrey (1893).

Annie died in Subiaco, Western Australia, on May 3rd 1900. Her second husband John Waldock had died nine years before. Henry Sherry’s eldest daughter, Amy Eliza Sherry, married Richard Thomas Fletcher, Catherine’s younger brother; thus, not only did the murderer’s widow marry the victim’s widower, but the murderer’s daughter married the victim’s brother as well. The Sherries are no ordinary family!

13 Responses to Henry W. Sherry: the lover and killer of Mrs Waldock