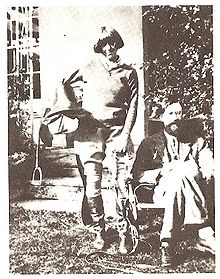 Dora Carrington with the love of her life, homosexual writer Lytton Strachey.

Dora Carrington is perhaps best remembered for being associated with the bohemian, artistic Bloomsbury Group of the early 20th century. Although not a part of the Bloomsbury Group herself, Carrington knew some of group’s members intimately. The person who had the strongest influence on her was, by far, Lytton Strachey, a man several years her senior and a well-known homosexual whose intellect and flamboyance made her fall irremediably in love with him. When he died, probably of stomach cancer, in early 1932, she was absolutely distraught, which is why she decided to kill herself two months after. Her paintings, mainly portraits and landscapes, have become synonymous with her somewhat unconventional existence and her fascinating private life. 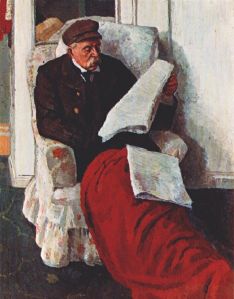 Dora de Houghton Carrington (or Carrington, as she preferred to be known) was the daughter of Samuel Carrington, a civil railway engineer who spent some thirty years working in India. Samuel Carrington had been born in Penrith, Cumberland, in the early 1830’s; his father came from Kent, his mother from Liverpool. By the time his famous daughter was born in 1893, he was already old enough to be her grandfather, but despite the age difference, young Dora felt nothing but adoration, if not curiosity, toward her ageing father. Mr Carrington had met his wife rather late in life; Charlotte Eliza de Houghton, whose maiden name our protagonist inherited as her middle name, was born in Surrey in 1854. There was, therefore a considerable gap between the ages of Dora’s parents. Charlotte had worked as a governess in the household of Reverend and Mrs Hanson in Axminster, Devon. Mrs Hanson, born Lilia Mary Carrington, was Samuel Carrington’s sister; when he returned from India, possibly during a trip to visit his sister and her brood of ten children, he met the children’s governess, and duly proposed. Interestingly, one of those ten children, Lilian Ethel Hanson, would later marry Francis Gassiot Houghton, Dora’s uncle; thus her maternal cousin married her paternal uncle.

A landscape painting by Dora Carrington.

Young Dora was born in Hereford, but only lived there for a few short years. She and her family soon moved to Bedford, where she would later describe her childhood as being “awful”. Dora had one elder sister, Charlotte Louisa (called Lottie), two older brothers and one younger brother, called Samuel, Edmund and Noel respectively. All three brothers went over to fight in France at the outbreak of WWI, but Dora, being a woman, was forced to remain at home; she would always bitterly regret having been born a woman.

Dora’s relationship with her mother was very different from that with her father. Charlotte Eliza belonged to a middle-class family, maybe of French origin given their unusual surname, but was extremely conventional and martyr-like, a fact which suffocated Dora and her free-minded brothers. Lottie, on the other hand, took after her mother, and when she decided to marry another conventional young man, rebellious Dora was horrified at the conventionality, expense and ridiculousness of the whole affair. Mrs Carrington dominated her brood well into adulthood, making the latter to dread Sunday mornings the most; every week Charlotte would walk her grown-up children in procession to church and lead them to the altar firmly holding the prayer book. Dora longed for a breath of fresh air.

When the 1911 census was taken, the family were still living at Rothsay Gardens, Bedford. Both girls were fortunate enough to become art students, probably encouraged by their old father. Dora excelled at painting, and it would be the beginning of a prolific, if somewhat undeservedly obscure career.

During her long and turbulent relationship with painter Mark Gertler, Carrington met would-be writer Lytton Strachey through fellow artist Vanessa Bell, Virginia Woolf’s sister. The two soon hit it off, and the oddest of amorous relationships blossomed. They became inseparable, and although both had many lovers over the years, they later decided to set up house together. This did not prevent Dora from marrying the attractive Ralph Partridge, whom accepted Strachey’s ominous presence but came to become incensed when he discovered that his wife was also sleeping with the famous hispanist Gerald Brenan; Carrington, Strachey and Partridge lived together in a house purchased by Strachey himself. One can only imagine what Mrs Carrington must have thought at the prospect of her youngest daughter living with two men!

Dora Carrington’s father died in 1918; her mother, who it was claimed had married Samuel Carrington out of pity “because he wanted looking after”, survived her daughter for several years and died in Cheltenham in 1941. In adulthood Dora had no wish to form a family of her own, and her marriage soon turned into an amicable union where both partners fornicated with third parties constantly; it soon became a fait accompli. Ralph soon began an affair with Frances Marshall, whom he later married. Dora meanwhile was smitten with Strachey -in between male and female love-affairs of course-. Then, in late 1931, Strachey became mortally ill, and died the following January. Virginia Woolf, who would kill herself nine years later during a bout of manic depression, wrote during those pitiful weeks that, to her mind, suicide in Carrington’s case seemed “quite sensible”.

Everyone knew Dora Carrington would not live another year without Strachey at her side; she borrowed a shotgun from a neighbour, allegedly to shoot some rabbits in the garden. Then, on 11 March 1932, she shot herself; she failed to kill herself instantly, however, injuring herself in the leg. She languished for three more hours, until she finally died. Her widower, Ralph, married his lover, Frances Marshall, and had a son who was baptised Lytton Burgo Partridge; this child would later marry Henrietta Garnett, one of the four daughters of Angelica Garnett, Virginia Woolf’s niece. The Bloomsbury Group, and Dora Carrington’s role in the world of art and female sexuality, lives on through their descendants.