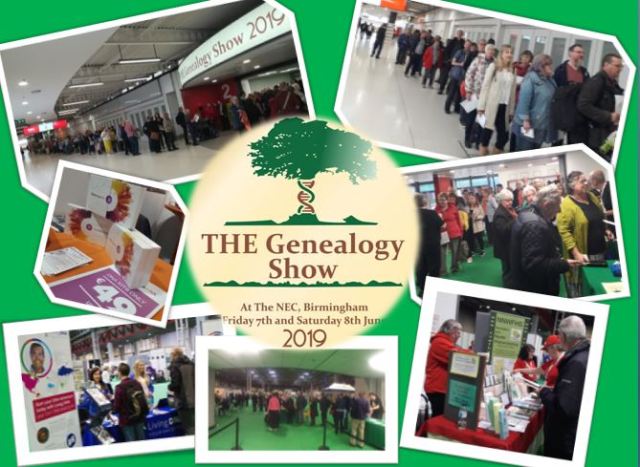 The buzz was felt at THE Genealogy Show all day long!

Well folks, it’s over. Sort of. Well, not quite. There is just so much to catch up on, emails to read, admin to follow-up on, and so, SO many ideas rushing through my head for the future…

THE Genealogy Show 2019, which took place at Birmingham’s NEC on Friday 7th and Saturday 8th June, was quite simply A HUGE SUCCESS in every possible way. As an organiser, but also having participated at other similar events, I can quite honestly say that TGS (as I’m starting to call it more and more frequently) has joined the starry firmament of international genealogy conferences. And it’s there to stay!

Nothing positive that happened could have happened without certain key people. First, I think a round of applause is due to Kirsty Gray, TGS Director and main thinking-head behind the event’s conception more than a year ago, in the wake of the cancellation of WDYTYA Live which left the UK orphaned and bereft of its main genealogical conference. Rounding up a team of international board members from far afield – from Australia to the Netherlands, from Spain to Canada – and trying to get THE Show on the road as planned could not have been done without Kirsty’s energetic, positive and natural leadership skills (and believe me, I know what I’m talking about, having worked for an events company for several years).

Kirsty’s fantastic team of doers and helpers was nothing short of perfection. Their tireless dedication, their commitment, their professional approach to any challenge was met with admiration by anyone who saw them in action. Special mention needs to go to Katherine Harrison, who worked day and night to make this Show not just possible, but an absolute triumph.

The Board, and the ad hoc team of volunteers which, again, saw people from further afield join the ranks, has been, without exaggeration or hyperbole, the best team I have ever worked with. I had not met a single one of them before (see caption), and yet over the space of a couple of days we bonded on so many levels that now I can safely call them my second family – excuse the cliché. 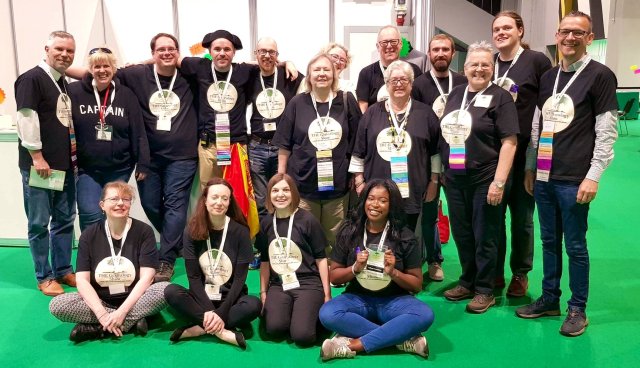 Most of the fantastic team who joined the ranks of international volunteers for THE Genealogy Show 2019.

I don’t need to go into the details of pre-event organisation. Suffice to say that it worked like a charm. It all happened so naturally, so organically, so efficiently! We always kept a smile on our faces – and so many people have highlighted the staff’s positive attitude during the event – that it just felt great to see how the good vibes within the team were reverberated through to the public across the hall at the NEC.

The atmosphere in the hall was excellent. Every time I looked I could see people in front of every stand; the corridors were ample enough to circulate without giving the impression of being too spread apart, so you could see a crowd without feeling cramped.  The green (VERY green) carpet brought in a feeling of professional touch and order, and quite frankly gave the impression that the place had been built for that purpose – you wouldn’t quite say that had they seen the hall the day before, believe you me! The layout was, according to the exhibitors I spoke to, simply brilliant. No one felt they were left out or shoved into a corner – even a late-comer was extremely pleased with their location!

Speakers were equally successful. It was not just the big names that made headlines – even less-well-known speakers, or talks on very niche topics, got very positive reviews from the public. It really felt like there was something for everyone, amateur or experienced, young and old, and that is definitely an element I hope to see in future editions.

Another popular feature which saw a constant flow of people was the Personal Wizard Consultation – you could almost hear the brick walls crumbling! And speaking of people, how fantastic it was to meet and greet participants from so many countries! New Zealand, Ireland, Canada, France, the United States, Germany, Australia, Spain, The Netherlands, Belgium… We always planned to bring to the UK a truly international event beyond the more UK-and-Commonwealth themes we always see in other events, and I think we delivered big time.

Some of my personal highlights – meeting geneacelebrities, Twitter followers, old and new friends – all in the space of two days!

Like many in the hall, I was personally disappointed that certain names (big and small) were not present. One of the family history societies I belong to, for instance, did not make it, and two well-known companies were conspicuous by their absence. We made no secret of the fact that literally everyone had been invited to exhibit, and for whichever reason of their own, they could not come. This is testimony of how much the public wants to see certain names at THE Genealogy Show. Fingers crossed they’ll listen to the public – their public – for the 2020 edition!

But the absence of certain exhibitors allowed other, smaller ones to shine like they never have before. It’s not every year that I join two more family history societies, nor that I get a chance to spend my money wisely on things that I really want.

I was so pleased with the turn-out at my own talk on Spanish genealogical research – and participants appear to have been even more pleased because I’ve since been asked by two attendees if I could prepare two lectures on the same topic for two other events!

The beginning of my talk on Spanish genealogical research, day 2!

Regardless of all of the above, I think the human element is what made this event extra special – I met so many people I’ve long been following on social media, that it was difficult not to geekily ask if we could take a selfie together. I met one of my genealogical heroes Maurice Gleeson, I finally got to have a delightful chinwag with Photo Alchemist Claudia D’Souza, I had a lovely and open conversation with Pat Scully (FIBIS), a fantastic exchange with my new friend and namesake Daniel Horowitz (MyHeritage) and a wonderful chat with WDYTYA magazine editor Sarah Williams – to name only but a few examples!!! I just wish I had had even more time to spend with exhibitors and participants, but we have to leave something for next time, don’t we?

Dubbed as “The People’s Show”, this was the first ever THE Genealogy Show. But it will not be the last. The second edition will take place on Friday 26th and Saturday 27th June 2020 in Birmingham, so make sure you save the date! Remember to follow THE Genealogy Show on Facebook and Twitter for announcements and updates as they come! 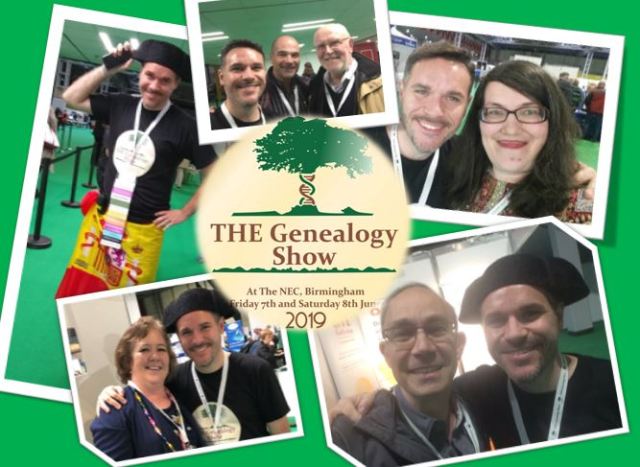 More highlights of a wonderful Show!

Passionate about Genealogy. https://elrincondelagenealogia.wordpress.com/ https://thegenealogycorner.wordpress.com/
View all posts by Dawsr →
This entry was posted in Birmingham, Genealogy, LivingDNA, THEGenShow2019, Who Do You Think You Are?. Bookmark the permalink.

1 Response to THE Genealogy Show 2019