One of biggest challenges we face when researching our ancestry or anybody else’s is the language barrier. There are many online tools that help overcome these barriers – from online translation tools to common phrases which are used in such documents.

Certificate of Birth, as mentioned on a Spanish specimen.

The purpose of today’s article is to show you an example of a Spanish birth certificate and what aspects you will certainly come across when ordering one, and what peculiarities you might also expect to encounter.

To begin with, you should know that birth (and marriage and death) certificates in Spain, collectively known as Civil Registration, started to be recorded in the year 1871*. Before that year, vital records were kept almost exclusively by the Church in local parishes. Today the latter are usually kept in centralised archives per bishopric, although sadly have been lost over the years due to the effects of time and, not least, due to anticlericalist actions and wars that have shaped Spain’s tumultuous past.

Each municipality in Spain has its own registry office (Registro Civil), and each one maintains it and controls access to its records. Whenever requesting a certificate, therefore, you will need to know in which municipality the birth took place. This can be very difficult to ascertain, particularly as some municipality borders have changed over the years and, more commonly, some municipalities share their name with the province where they are located. In fact, almost all of Spain’s 50 provinces share their name with their respective capital city. For instance, if your ancestor was born in Seville, you will have to make sure that the record you are looking indeed relates to the city of Seville, and not to any other location within the province of Seville, such as Constantina, Dos Hermanas, Écija or Utrera, to name only a few examples. Unfortunately no centralised registry for all births, marriages and deaths exists (not even an index), like in the United Kingdom.

A basic map of the province of Seville showing its capital (the city of Seville) and a fe other municipalities within the region, each with its own civil registry office.

Civil Registration records are kept in chronological order and separated in books according to births, marriages and deaths. Knowing the exact date (or a very good approximation) is essential for which you can use external sources like newspaper announcements or baptism records to work your way back in time. Also important to bear in mind is the fact that, while in some locations are so small that finding a person’s birth certificate will be easy -particularly if the surname is not common-, in larger communities it would be like finding a needle in a haystack, and very often without an exact date the registrar will not even look for the certificate you are requesting.

Ordering a birth certificate is free of charge and can be made online via the website of the Spanish Ministry of Justice (I suggest you contact me or get someone acquainted with the website to help you out with the procedure, as there are a few intermediate steps you will have to overcome). Overall you will need to supply the registrar with basic information, such as the province and the municipality where the birth took place, the person’s name and two surnames (yes, Spaniards have two surnames: that of the father and that of the mother, who incidentally does not become a Mrs X upon marriage), the parents’ first names and the date of the birth. There is an additional, non-obligatory field you can always use to your advantage (for instance, I usually state if the date is actually an approximation, so the registrar can -if they’re feeling generous- look up the birth a few months either side of the given date).

Birth certificate forms have changed considerably since they were first introduced. While some communities almost immediately started using printed forms that were later filled in by hand, many registry offices wrote each entry by hand in full. I can imagine that must have been quite a tedious job. 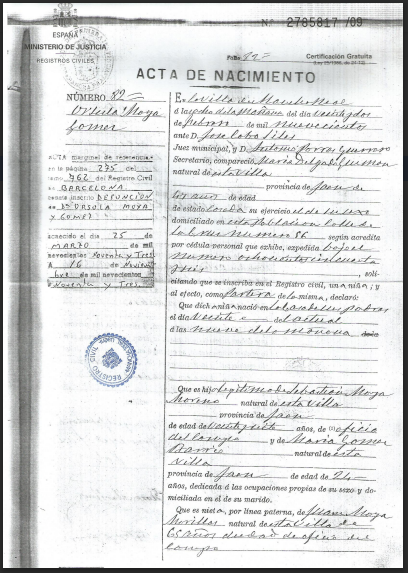 The example I have chosen for you is a printed form which dates back to the year 1900 and, like most birth certificates, will mention a series of fiels that I have listed below, with some comments: 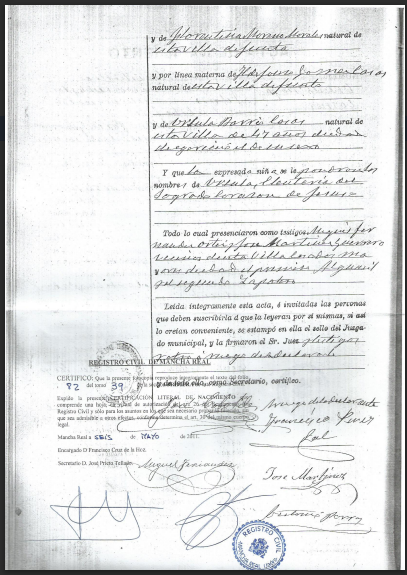 Back of a Spanish birth certificate.

As a last note, you may also notice that on some birth certificates there are marginal notes made by the registrar and dated when the note was made. Such notes are made only on a handful of occasions as communications between civil registry offices was not consistent, but may often include a mention of the person’s marriage, death, and even such wonderful details as the date of the person’s divorce, if he or she was legally declared incapacitated, or when their first national identity card was issued. The present example notes the person’s date of death and where the event took place., which of course will make tracing a death certificate a million times easier.

Do you still have questions about birth certificates in Spain? Having trouble finding an ancestor? Drop me a line and/or follow me on Twitter!

*There was a first attempt to initiate Civil Registration once before in the early 19th century. These records are kept by different local authorities throughout Spain, so you are probably more likely to find your ancestors’ information via church records.